Hello, CarbonWA friends: Soon, we’ll be sharing our policy goals for next year and updating you on developments with other environmental groups like the Alliance for Jobs and Clean Energy, The Nature Conservancy, Washington Tribes, and the business community as we all work toward pricing carbon. In the meantime, read on for policy updates and climate news!

Puget Sound Energy, in a settlement agreement has agreed to pay off its debts on Colstrip by 2027, significantly earlier than the original 2045 payoff date. This is a useful step towards shutting down Colstrip units 3 and 4 (Units 1 and 2 are already scheduled to shut down in 2022). This agreement doesn’t ensure that Colstrip will shut down in 2027, and UTC commissioners will still need to approve the deal, but it makes it much easier to achieve an earlier shutdown of Colstrip units 3 and 4 because PSE will not be under as much pressure to continue to run the plants to pay off existing debt after 2027.

This is an encouraging step, but just a step. We will still need a formal shut down agreement to ensure that Colstrip is decommissioned in a timely, responsible manner. There will also be the question of what resource will replace the colstrip power (PSE appears to favor natural gas). A strong statewide climate policy (like a carbon tax!) would move us in the right direction rapidly on both fronts.

What is Really the Greenest Car You Can Buy?

New research by the CarbonWA policy team spearheaded by board member Greg Rock shows that if your utility is Puget Sound Energy, an electric car may not be the greenest option (in the short term). Puget Sound Energy’s continued reliance on coal and natural gas actually means that a Toyota Prius will use less carbon over its lifetime than a Nissan Leaf. But, if you are located inside of Seattle (and get your electricity from Seattle city light) or you have your own carbon free power, a Nissan Leaf is a much better option. If you are buying a new vehicle keep in mind this ranking may change if PSE greens up their electricity portfolio. Check out the chart below to see how the vehicles stack up – and keep in mind that this dynamic will change if/when Puget Sound Energy reduces the carbon emissions in its fuel mix. 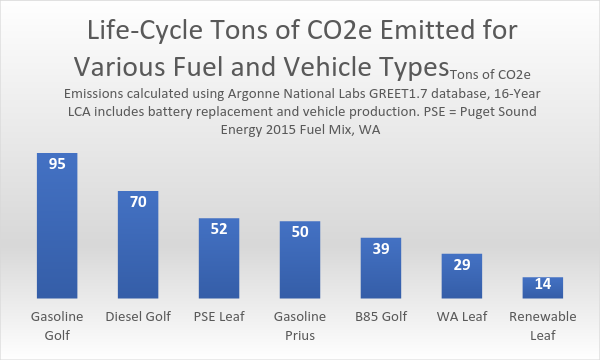 Can PACE Financing Work in WA to Green Buildings?

New research overseen by the Carbon Tax Center and conducted by CarbonWA members, led by Megan Conaway, explored whether a PACE program could be implemented in Washington State. While Washington has a relatively green building code, the majority of our buildings were built before the more stringent, climate focused building codes were created. Frankly, a great deal of our buildings are the equivalent of dated gas-guzzling SUV’s – in need of renovation or replacement by cleaner, greener buildings. Nationwide buildings make up about 40% of our carbon footprint – and that percentage is probably even higher in Washington due to our relatively low electricity footprint. One way to address this climate problem is through a program called P.A.C.E. or Property Assessed Clean Energy. A PACE financing program could dramatically increase funding available to renovate our existing buildings. So why doesn’t Washington State have a PACE program? We set out to find the answer. Check out our blog for a summary of our finding that PACE would require an amendment to the Washington State Constitution due to a provision in the state Constitution barring the “lending of the state’s credit“. While it is not impossible to alter the Constitution, it is a complex and challenging political effort requiring a 2/3 majority in the legislature. Utilities can offer incentives for building efficiency upgrades, but for now a full-scale PACE program is stuck behind a little-known Constitutional provision designed to protect Washington State from abuse from the railroad companies that dominated the West in the late 1800’s.

As we head into the fall, we are closely following the work of everyone in the environmental movement who is talking about a climate initiative next year. The Alliance for Jobs and Clean Energy is busy organizing for an initiative drive. We are withholding judgement until we see more concrete initiative language from them, which still hasn’t come out. At the same time, the Nature Conservancy has publicized that they intend to put forward a carbon tax initiative with a ‘centrist coalition.’ It’s not clear if that coalition exists yet, or what kind of policy they prefer, but we are open to working with them (and anyone) on an effective, fair carbon pricing solution. Just last week, the President of the Quinault Tribe of Washington wrote that if the Alliance measure doesn’t include their priorities they will probably run their own initiative. We aren’t sure if they are still hoping to change the Alliance policy, or if they really want to move forward on their own. It’s not clear to us who exactly will be actually gathering signatures come January, but we’ll do our best to be transparent about what we learn.

On the bright side, contrast this to a few years ago when carbon pricing looked too tough to touch, now everyone is jumping in on the fun! So, at this point it looks like there could be as many as three carbon tax initiatives (though that’s unlikely) or as few as zero (though that also looks unlikely). Still, we are working to ensure that 2018 is the year we chalk up some real climate victories at the state or local level! Expect us to announce our policy goals for 2018 soon, which will focus on moving forward on climate in 2018 and ensuring that voters see atleast one climate initiative in 2018.

Let’s keep at it.

From the whole Carbon Washington team