Hello, CarbonWA friends: Read on for some updates as we look back and begin to look ahead.

We are still parsing the election results but thanks to a handful of our staff and supporters, we’ve pulled together a brief analysis, including a few maps reviewing the I-732 results statewide. You can take a look at some additional maps and data from the election results on our website here. As we learn more we will continue to share our findings. Initially it looks like:

We are still filled with pride for all we’ve done and gratitude that we’ve been able to do it together. We ran a campaign funded and run primarily by volunteers and citizens, showing Washington and the nation that there is a dedicated, mobilized constituency demanding action on climate change. So, if you need a pick-me-up take another look at our last email blast to see the highlight reel of our work so far.

If you have more thoughts or feedback on the election and what we should do next, please share them via email. Contact us at communications@carbonwa.org, and visit this page to see the (anonymized) feedback we’ve received so far.

For the rest of 2016, expect CarbonWA to be a little quieter than usual but don’t mistake that for inactivity. We are analyzing the election, reviewing feedback from our supporters, and evaluating potential roads ahead. We are aiming to have a more definitive roadmap for the organization by early next year that, in true CarbonWA fashion, will include an aggressive strategy to reduce carbon in a fair, bipartisan, way. In the meantime, there are two ways you can still help us fight climate change:

A new Years of Living Dangerously episode is out featuring Yoram Bauman as he gives the celebrity host, Nikki Reed, a primer on carbon pricing – and later shows up in the episode moderating a panel with millennial leaders including Camilla Thorndike, Jordan Vogel and Tom Erb – read more here and catch the episde on National Geographic http://yearsoflivingdangerously.com/story/price-on-carbon/. More recent climate news below:

There will never be a better time to save the planet – Medium – call to arms by futurist Alex Steffen. Cites I-732 as sign of hope, despite not passing.

We didn’t get a carbon tax over the finish line in 2016, but we moved climate action a heck of a long ways down the field. In the wake of this election, its clear that Washington must lead on climate and that any solution must reach out across party lines to have a chance to succeed. But, just like a real halftime, we are taking some time to rest, analyze, adjust, and chart a path for a second half that ends in a win. We hope you’ll join us in staying tuned in, sharing your thoughts about the road ahead, and in taking some time to cherish our family, friends, and the planet. 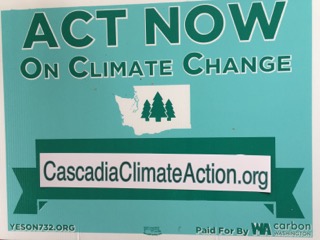 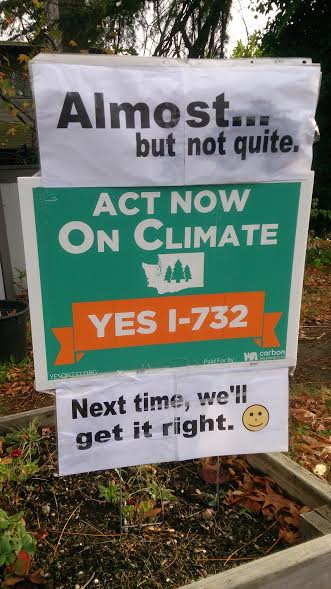